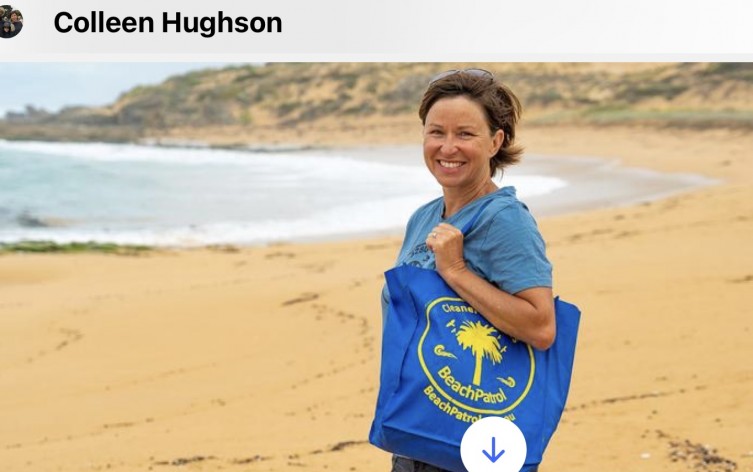 Eco-defender Colleen Hughson is the 2022 Warrnambool Citizen of the Year.

The long-time Warrnambool resident started a movement by not just picking up rubbish on local beaches, but working tirelessly to try and stop it at the source.

Colleen leads Beach Patrol 3280-3284, and along with a team of fellow volunteers, she was instrumental in the banning of plastic stemmed cotton buds in Victoria and New South Wales.

Long-time visitors to the beaches west of Thunder Point can also attest to the tangible difference Beach Patrol has made in recent years.

Colleen was also recognised at the 2019 Warrnambool Australia Day Awards as a Local Achiever.

Ms Hughson said that while she had won the award, she was accepting it on behalf of everyone who helped make their local beaches and coastline better places.

“It’s a wonderful opportunity to raise awareness about the issue of marine litter along our coastline and I also see it as an opportunity to thank all the volunteers that are part of Beach Patrol. Thank you to my husband and kid too.”

Ms Hughson said that the first time she visited a beach with the sole purpose of picking up rubbish was in August 2017 when she saw cotton buds on Shelly Beach, and things had grown from there.

“I was walking along and seeing all these sticks and I thought ‘this is terrible, someone should do something about this’ and as I was walking home I thought ‘hang on, I could go back with a bag and pick them up’,” she said.

“It was a bit of a wake up and I haven’t looked back since then.”

Colleen and her fellow Beach Patrollers catalogue all of the rubbish they find using the free Litter Stopper app.

“The great thing about that data is that it’s fed directly to the State Government so that they can see and quantify the litter problems we have in Victoria and can start looking at the issues to address,” she said.

“There are a lot of people that clean up rubbish all the time, and that goes undocumented.

“Litter Stopper is a very user-friendly app to use. It’s not just for beaches. If you’re cleaning up on your street or in your school, you can log it there as well.”

BeachPatrol Introduction to Plastic Litter on our beaches